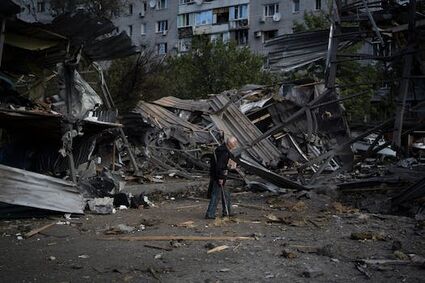 An elderly man walks past a car shop that was destroyed after a Russian attack in Zaporizhzhia, Ukraine, Tuesday, Oct. 11, 2022.

Air raid warnings sounded throughout Ukraine for a second straight morning as officials advised residents to conserve energy and stock up on water. The strikes have knocked out power across the country and pierced the relative calm that had returned to Kyiv and many other cities far from the war's front lines.

"It brings anger, not fear," Kyiv resident Volodymyr Vasylenko, 67, said as crews worked to restore traffic lights and clear debris from the capital's streets. "We already got used to this. And we will keep fighting."