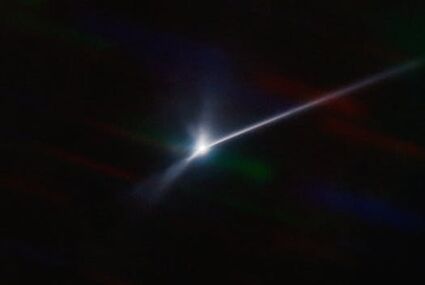 This image made available by NOIRLab shows a plume of dust and debris blasted from the surface of the asteroid Dimorphos by NASA's DART spacecraft after it impacted on Sept. 26, 2022, captured by the U.S. National Science Foundation's NOIRLab's SOAR telescope in Chile. The expanding, comet-like tail is more than 6,000 miles (10,000 kilometers) long.

CAPE CANAVERAL, Fla. - A spacecraft that plowed into a small, harmless asteroid millions of miles away succeeded in shifting its orbit, NASA said Tuesday in announcing the results of its save-the-world test.

The space agency attempted the test two weeks ago to see if in the future a killer rock could be nudged out of Earth's way.

"This mission shows that NASA is trying to be ready for whatever the universe throws at us," NASA Administrator Bill Nelson said during a briefing at the space agency's headquarters in Washington.