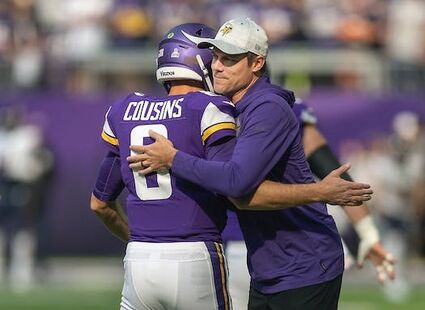 Vikings quarterback Kirk Cousins received congratulations from coach Kevin O'Connell after the team's 29-22 victory over the Bears on Sunday.

The franchise-record 17 consecutive passes Kirk Cousins completed to start Sunday's game were part of a game plan the quarterback said "put the wind at our backs," with plays that allowed him to find his first read in open space.

The 17-play drive Cousins orchestrated to give the Vikings their final 29-22 lead over the Bears, Kevin O'Connell said, featured examples of Cousins "really playing quarterback [Sunday], as far as playing the game post-snap, throwing completions, being accurate." Later, he added, "Where he's at and where he's headed in this offense, I feel very, very good about Kirk Cousins."

Sunday was the first time this season the Vikings eclipsed 300 passing yards. Their offense still goes through stretches of maddening inconsistency, like during the Bears' 19-point run to take the lead in the second half. It was difficult to listen to Cousins' and O'Connell's postgame comments, though, and not infer the quarterback is more supported and empowered than at any point during his five seasons with the team.