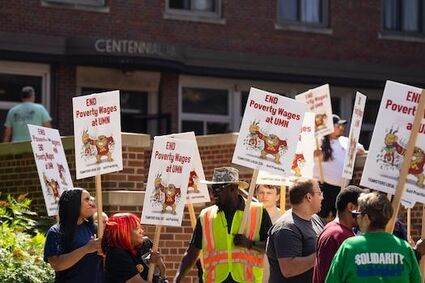 About 100 people picketed and marched in support of University of Minnesota workers represented by Teamsters Local 320 on move-in day in August outside Centennial Hall on the U's Minneapolis campus.

The union representing service workers at the University of Minnesota has authorized a strike, leaders announced Monday, noting that 93% of its members have voted in favor of the action.

The Teamsters Local 320 union sued the university and its Board of Regents last month over claims of inadequate pay and employee discrimination that allegedly have violated the Public Employment Labor Relations Act. The workers involved in the potential strike help all over campus to serve food, clean buildings, collect waste, provide general maintenance and more.

The Teamsters union voted last week, and the strike would involve 1,500 workers and affect more than 60,000 students at the U.