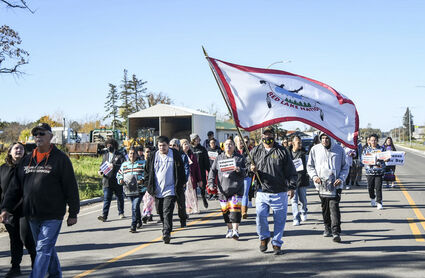 Sporting ribbon skirts and other traditional regalia, about 75 participants held up signs of support and marched along Highway 1 as a traveling drum group was pulled on a trailer about 3/4 of a mile to RLNC where a traditional walleye feast awaited them.

One focus of the celebration was an 1889 land agreement with the U.S. government that recognized Red Lake's formal sovereignty, which followed Red Lake's resistance to the Dawes Allotment Act of 1887. This allowed Red Lake Nation members to hold their land in common and remain a closed tribal nation with its own legal jurisdiction.