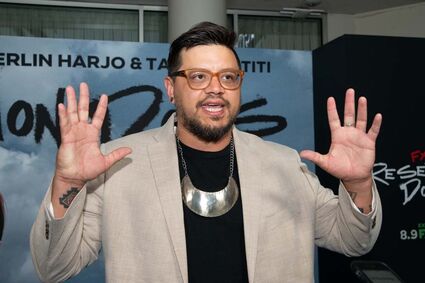 Sterlin Harjo, executive producer of the breakout hit Reservations Dogs, is using the show as a platform for other Native American writers, actors, rappers and performers. (Photo: Nicole Rico for Native News Online).

Over the past few years, Indigenous people have become more visible in mainstream arts, entertainment and culture in the U.S. and Canada. In celebration of Indigenous Peoples' Day, here are 10 Native Americans blazing trails in arts and culture that you should get to know.

Executive producer Sterlin Harjo (Seminole, Muscogee) is the creative force behind the groundbreaking Indigenous series Reservation Dogs. Since its 2021 debut, the show has garnered numerous awards, including a Film Independent Spirit Award, a Peabody Award, an AFI Award, and more. He's used the show as a platform for other Native writers, actors, rappers and performers. Harjo is also a founding member of the 1491s, a Native American comedy troupe that performs worldwide.

Bethany Yellowtail is a member of the Northern Cheyenne Nation and one of the top Indigenous designers in fashion. Since launching her brand, B. Yellowtail, in 2015, she has risen to the global fashion stage, with her work featured in Vogue and honored alongside industry powerhouses like Tom Ford. She currently partners with the Native Wellness Institute on the Rez Girls Mentorship fund, which provides workshops, retreats and mentorships opportunities for women, girls and two-spirit relatives of Missing and Murdered Indigenous Peoples.