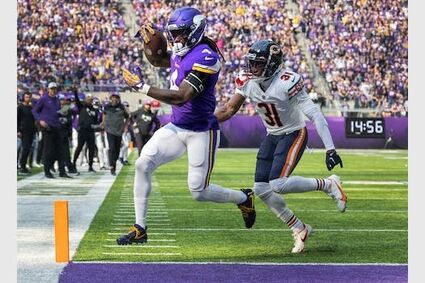 Dalvin Cook (4) of the Minnesota Vikings scores a touchdown in the second quarter.

The day began like something out of a dream for the Vikings fans who strolled through U.S. Bank Stadium's glass gates on an idyllic Twin Cities afternoon, roared their approval as the videoboards showed the final moments of the Packers' loss to the Giants in London and giddily watched their favorite team build an 18-point lead against the Bears through two near-flawless quarters, and Kirk Cousins and Justin Jefferson mounted an assault on the team's record books.

Cousins completed his first 17 passes Sunday, breaking Tommy Kramer's record for consecutive completions. With his third catch on the first drive of his 38th career game - a crossing route where he ran undisturbed through the middle of the Bears' defense - Jefferson surpassed Randy Moss' record for the most receptions in his first three years with the team. After the game, coach Kevin O'Connell presented the quarterback and receiver with the first two of the three game balls he awarded in the locker room.

O'Connell awarded the final game ball to Cameron Dantzler after the cornerback stripped former teammate Ihmir Smith-Marsette for a fumble that might have saved the Vikings' 29-22 win in the final minute. The turnover was critical even in a game where the Vikings went 12-for-15 on third downs, held the ball for 36 minutes, 44 seconds and averaged nearly 6 yards on each of their 74 plays.