The camp at 205 Girard Av. N. was located on city land and had been home to about 30 people 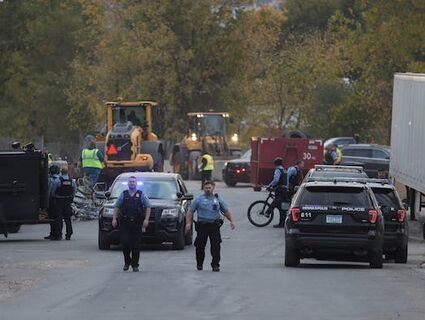 Minneapolis Police taped off several blocks surrounding the Near North homeless encampment Thursday, October 6, 2022 as an estimated 30 people were evicted from tents and semi-permanent structures.

Police arrived unexpectedly at a long-standing encampment in the Harrison neighborhood of Minneapolis at about 7 a.m. Thursday, taped off the surrounding streets for several blocks in every direction, oversaw the eviction of about 30 people and arrested three protesters.

Encampment defenders had been having breakfast at the Near North camp, located at 205 Girard Av. N., when police arrived.

Volunteer Benjamin Melançon said they anticipated the city would enforce no-trespassing orders posted at the encampment earlier this year but did not know when because the notices did not specify exact dates. He said police gave those present five minutes to leave or face arrest.