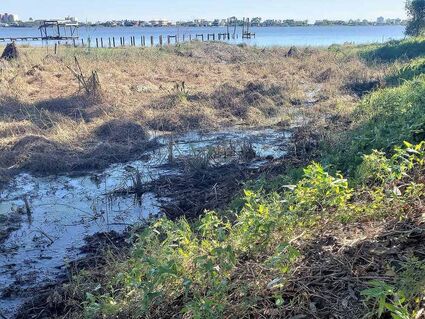 This photo of the south end of the canal, taken in 2018, shows where the waterway met up with Little Lagoon. Gregory Waselkov

In the beachside resort town of Gulf Shores, Alabama, locals had often referred to an odd feature in the landscape as "Indian ditch." As far back as the 1820s, a handful of antiquarians and United States Army engineers recognized it as a feature that predated white settlers, but it hadn't received enough scholarly attention to explain its history and function. One resident, Harry King, who had been exploring the back bays of the region, became fascinated with the remnants of this large trench, about 30 feet wide and 3 feet deep. On visits to the archaeology museum at the University of South Alabama in Mobile, King would encourage researchers to examine it. Gregory Waselkov, a now-retired anthropologist at the university, figured the ditch was probably an antebellum construction built by enslaved laborers.

"It took me forever to go out there and take a look," says Waselkov. "There are lots of features like that in the swampy areas around Mobile, from logging, and from rice cultivation-there are all kinds of reasons you might have big ditches. But when I saw it, I realized it's something different."

Thanks to King's urging, Waselkov finally began an investigation of the site in 2017 with a team of volunteer archaeologists. They confirmed that this long-overlooked trench is a feat of engineering and a rare archaeological find: a canal, nearly a mile long, built for canoe travel 1,400 years ago by the Native Americans who navigated the region's waterways. In a report published online in June in the Journal of Field Archaeology, the researchers described how the canal would have connected the Gulf of Mexico with more protected bays, allowing better access between coastal fishing areas and trade routes to the rest of the Southeast.