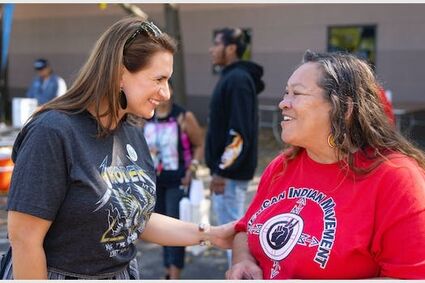 Minnesota Lieutenant Governor Peggy Flanagan chats with Jackie Neadeau, the director of AIM Minneapolis, at a "Get Out the Vote" event on Tuesday, Sep. 20, 2022 at American Indian OIC in Minneapolis.

DFL Lt. Gov. Peggy Flanagan and Republican Matt Birk are 40-something parents who live in Twin Cities suburbs and are seeking the second-highest job in the state.

One is the nation's highest ranking Native American woman elected to executive office, the other a former pro football player who started a Catholic school. And both say they accepted their No. 2 roles with an agreement they would be partners, not subordinates.

"The beauty of being in the role of governor and lieutenant governor is you don't have to do things alone," Flanagan said recently, referring to DFL Gov. Tim Walz. "We lift each other up."