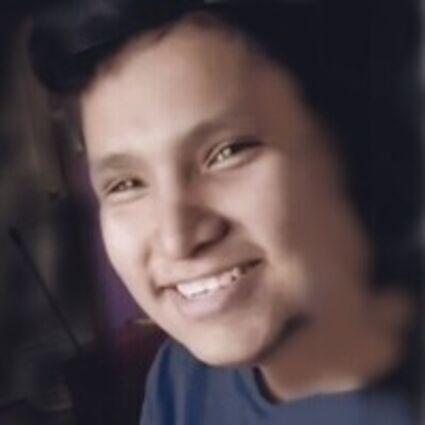 Lance Mahto Ross was born on February 28, 2003 to Ashley Ross Feather and Owen McKay. He was adopted and raised by his grandparents Solomon and Claudette Ross. From the day he was born he never left their side. As a baby Mahto was diagnosed with neurofibromatosis. Despite the disadvantages he faced and being told he would only have him until he was a teenager, he made the best out of it.

Lance was always a helpful person who earned good grades in school and proved the doctors wrong by recently graduating from high school with honors. It was the happiest day of his life. From that day forward he got his own place. He worked at various jobs, always had a plan to better his life. That's what we loved about Mahto. His ability to never let life's struggles get the best of him. We admired his strength and determination.

Mahto started his education in Headstart at the Fort Totten Center, attended Tate Topa Elementary and went on to continue grade school and high school at Four Winds Community School where he was always on the honor roll and made us all so proud. Along with his education journey, he met many amazing, helpful teachers who made a huge impact on his daily life. They were the reason he looked forward to each day at school. We can't thank them enough for all they have done for Mahto and the family.

Mahto had a big heart and loved and cared for his family deeply. He shared an inseparable bond with his sister, Sierrah. They went everywhere together. Both were a part of the Class of 2022 at Four Winds High School.

Mahto loved driving around, listening to music and playing games on his PS4. He looked forward to getting all the newest games. You would see him always willing to give a helping hand, spending time with his cousins, friends and siblings. Always wrestling around, cracking jokes, just enjoying each others company.

His latest goal he set out for himself was buying a new house for his sisters and brother, he wanted them all under the same roof again. More than anything, Mahto missed his parents Solomon and Claudette, brothers Wade and Rory. We know he is happy to be reunited with them all in Heaven. Lance will be remembered for his huge heart, goofy personality, admirable strength.

The procession will leave at 4:00 p.m. from City Plaza.

Burial will be in St. Michael's Cemetery