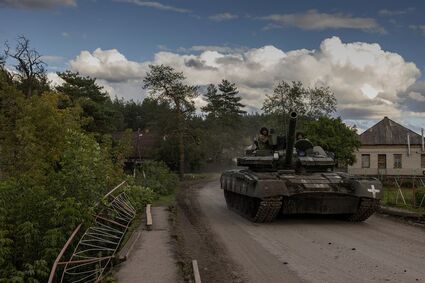 Ukrainian troops moved through the recently recaptured village of Yatskivka, in the Donetsk region of Ukraine on Tuesday, Oct. 4, 2022. The Ukrainian army has achieved a series of military successes in recent weeks, but these gains have come with a sad twist - the land it has reclaimed is largely depopulated and in ruins.

KYIV, Ukraine - Russian President Vladimir Putin signed the final papers Wednesday to annex four regions of Ukraine while his military struggled to control the new territory that was added in violation of international laws.

Ukrainian law enforcement officials, meanwhile, reported discovering more evidence of torture and killings in areas retaken from Russian forces. In Lyman, an eastern town liberated after more than four months of Russian occupation, residents emerged from their destroyed homes to receive packages of food and medicine.

In a defiant move, the Kremlin held the door open for further land grabs in Ukraine.