AG's suit says firearms were used in crimes, including a gun traced to shootings a St. Paul bar 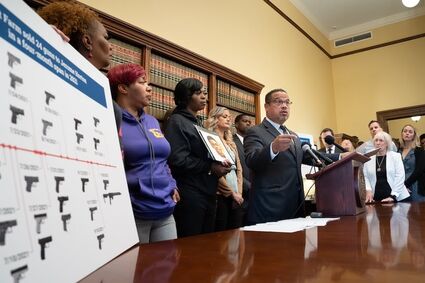 Minnesota Attorney General Keith Ellison announced on Wednesday a lawsuit against Fleet Farm for allegedly selling firearms to straw purchasers. He was surrounded by relatives of people who died from gun violence and a 6-year-old boy who found a loaded handgun in his south Minneapolis yard.

Minnesota Attorney General Keith Ellison is suing Fleet Farm, accusing the retailer of repeatedly selling guns to buyers who turn around and resell them to violent criminals who cannot legally buy the weapons themselves.

At least one of those guns acquired in such a "straw purchase" was used in a 2021 shootout in a St. Paul bar that left one woman dead and 14 bystanders injured.

At a news conference Wednesday, Ellison said Fleet Farm was "negligently selling firearms to straw purchasers, aiding and abetting these criminals and contributing to gun trafficking in Minnesota by allowing guns to get into the wrong hands."