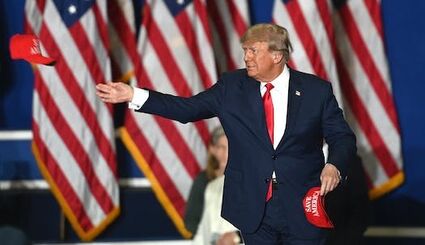 Former President Donald Trump tosses caps to the crowd as he steps onstage during a rally at the Macomb Community College Sports & Expo Center in Warren, Mich., Saturday, Oct. 1, 2022.

WASHINGTON - Lawyers for former President Donald Trump asked the U.S. Supreme Court on Tuesday to step into the legal fight over the classified documents seized during an FBI search of his Florida estate, escalating a dispute over the powers of an independent arbiter appointed to inspect the records.

The Trump team asked the justices to overturn a lower court ruling and allow the arbiter, called a special master, to review the roughly 100 documents with classification markings that were taken in the Aug. 8 search of Mar-a-Lago.

A three-judge panel from the Atlanta-based U.S. Court of Appeals for the 11th Circuit last month limited the special master's review to the much larger tranche of non-classified documents. The judges, including two Trump appointees, sided with the Justice Department, which had argued there was no legal basis for the special master to conduct his own review of the classified records.