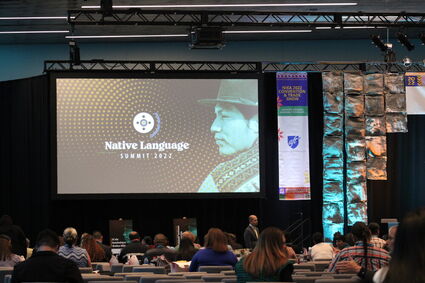 2022 Tribal Language Summit was hosted by the Bureau of Indian Education at the Oklahoma City Convention Center. (Photo by Darren Thompson for Native News Online)

OKLAHOMA CITY - On Tuesday, more than 600 people attended the Tribal Language Summit at the Oklahoma City Convention Center to hear from leading educators and policymakers in Indian Country on how to protect, preserve and promote America's Indigenous languages.

The annual one-day event is federally-funded and organized this year by the Bureau of Indian Education (BIE). It is the first in-person convening since 2019, event organizers said.

"As Indigenous peoples, our languages are the heart of our identity and the source of our strength as the first peoples of this continent," Principal Deputy Assistant Secretary for Indian Affairs Wizipan Garriott said during Tuesday's opening presentation.