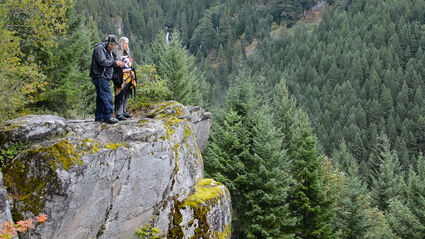 WASHINGTON – Members of the Confederated Tribes and Bands of the Yakama Nation and the Confederated Tribes of Grand Ronde yesterday asked the Supreme Court to hold the federal government accountable for bulldozing their sacred site to add a turn lane to a nearby road in Oregon near Mount Hood. In Slockish v. U.S. Department of Transportation, the Native American plaintiffs are asking the Supreme Court to tell the federal government it must consider all possible options for repairing the site-such as removing an embankment placed over an ancient burial ground, replanting trees, and allowing reconstruction of a sacred stone altar.

Native tribes have used the land around Mount Hood, Oregon, to hunt, gather food, fish, bury their dead, and perform religious ceremonies for centuries. The sacred site at issue in this case, known as Ana Kwna Nchi Nchi Patat (the "Place of Big Big Trees"), lay along an ancient Native American trading route now followed by U.S. Highway 26 and consisted of a burial ground, campground, old-growth trees, and ancient stone altar, all on less than one acre of land. Wilbur Slockish, who is a Hereditary Chief of the Confederated Tribes and Bands of the Yakama Nation, and Carol Logan, who is a spiritual practitioner and elder in her tribe, regularly visited the site for decades to pray, meditate, and pay respects to their ancestors through memorial ceremonies. But in 2008, the U.S. Federal Highway Administration ignored their pleas to protect the site and bulldozed it to add a turn lane to the nearby highway, even while admitting it could have added the turn lane without harming the site. (Watch their story.)

"Native American sacred sites should be given just as much respect and protection as churches, synagogues, mosques, and other houses of worship," said Luke Goodrich, vice president and senior counsel at Becket. "It's not the nineteenth century anymore, where the federal government can wantonly destroy Native American sacred sites without consequence; after this latest tragedy, the very least the government can do is to pursue every possible avenue for repairing this site and allowing the plaintiffs' religious practices to resume."

After failed negotiations with the government to restore the sacred site, the tribe members pursued their claims in federal court, arguing that the land should have been protected under the Religious Freedom Restoration Act (RFRA), the Free Exercise Clause, and several environmental laws. In 2018, a lower court decided that federal law does not prohibit the government from destroying sacred sites on federal land. On appeal, the Ninth Circuit similarly ruled that the government would not be held accountable for destroying the tribes' sacred site. With the help of Becket, the tribe members now ask the Supreme Court to correct this injustice.

"For centuries Native Americans have endured the destruction of sacred places by the federal government, and it's heartbreaking that the court would say this completely preventable destruction was okay," said Carol Logan, a member of the Confederated Tribes of Grand Ronde. "All we want is the return of our sacred artifacts, the rededication of the area for our ancestors, and the promise that we can continue to worship as our tribes have done for centuries.