Life in prison for fatal road rage shooting of youth baseball coach on Hwy. 169 in Plymouth

Jay Boughton was driving his teenage son home from a ballgame last July when he was shot on Hwy. 169 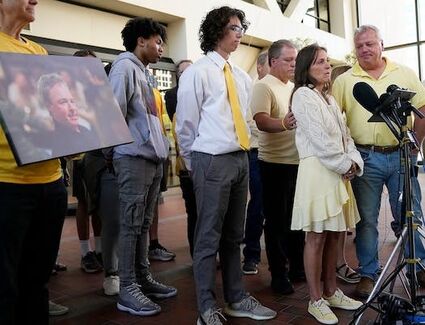 Jay Boughton's wife, Kristin, spoke to news media Tuesday in Minneapolis after Jamal Smith was sentenced to life in prison for fatally shooting her husband.

A Chicago man was sentenced to life in prison Tuesday, three months after a Hennepin County jury convicted him of first- and second-degree murder for the fatal road rage shooting of a local youth baseball coach last summer.

Amalie Boughton was 13 when her dad, Jay Boughton, was killed July 6, 2021, and up until then she had "never lost anyone in my life or been to a funeral before," she said inside the packed courtroom. She sat beside her grieving mother, Kristin, and older brother Harrison, who was in the passenger seat the night their father was shot on Hwy. 169 in Plymouth by Jamal Lindsey Smith while driving home from Harrison's baseball game.

"They just wanted to get home that night for a hot shower and bed," said Boughton's 81-year-old mother, Nova Boughton, in her victim impact statement, in which she decried escalating gun violence and Smith's senseless actions 455 days ago.