A brief history of the pow wow 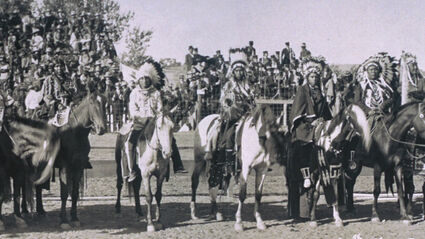 A photo labeled "Indians on Dress Up Parade" at the Round-Up in Pendleton, Oregon, in 1910. Photo: M.B. Marcell / U.S. Library of Congress

History wastes little time distorting who people were, why they did the things they did, and unless a given piece of history was lucky enough to have a skilled, principled scholar on hand to jot down every important particular, perhaps the only thing that survives intact is the spirit or intent behind the history.

When we look at the history of pow wows we do not have much tribal history, passed down through stories and winter counts, to fall back on, and so despite pow wows being an important part of most tribal communities, the real history of pow wows is being made by people today, by just having pow wows.

Unlike the pow wows of the distant past, modern pow wows are being recorded, chronicled, and people are living the history, as performers, vendors, attendees. Generations from now a detailed record of the how and why of our present day pow wows will be readily available.