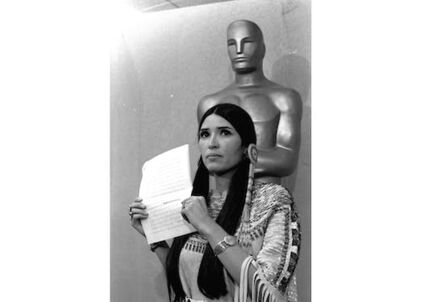 Sacheen Littlefeather, a Native American activist, tells the audience at the Academy Awards ceremony in 1973, that Marlon Brando was declining to accept his Oscar as best actor for his role in "The Godfather."

Sacheen Littlefeather, the actor and activist who declined Marlon Brando's 1973 Academy Award for "The Godfather" on his behalf in an indelible protest of Hollywood's portrayal of Native Americans, has died. She was 75.

Littlefeather's niece, Calina Lawrence, confirmed that she died peacefully Sunday, surrounded by loved ones at her Marin County, California, home. The cause was breast cancer, the family said.

Littlefeather's appearance at the 1973 Oscars would become one of the award show's most famous moments. Clad in buckskin dress and moccasins, Littlefeather took the stage when presenter Roger Moore read Brando's name as the winner for best actor.