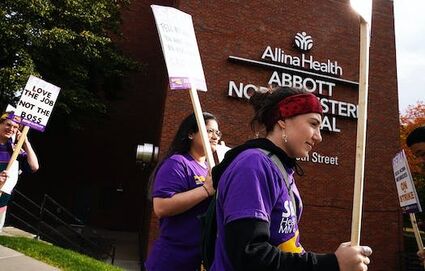 More than 130 hospital mental health workers went on strike against Allina Health on Monday - a year to the month after unionizing in an effort to improve benefits and workplace safety.

Stephanie Stark, a senior mental health coordinator, said the strike was necessitated by inaction on worker demands for pay that matches college-level training, union-protected benefits and security "that acknowledges the unique challenges of our position."

"There's an awful lot of things Allina is not interested in," said Stark, during a strike rally outside Allina's Abbott Northwestern Hospital in Minneapolis. "But if they want to hire and keep good employees, they're going to have to start getting interested in settling the contract with the benefits and safety protections we deserve."