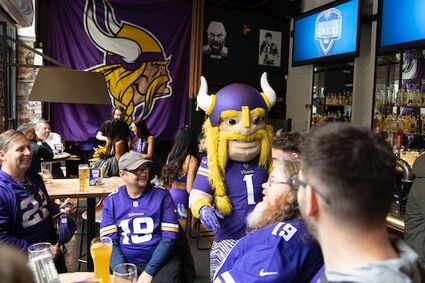 The Vikings mascot, Viktor, attended a fan event at a bar in Manchester, England, on Wednesday ahead of the team's game against the Saints in London on Sunday.

Tyler Williams' job this week is to essentially trick the body clocks of 53 Vikings players and their coaching staff into thinking a game in London is business as usual for not only this week but next week when the team won't have the typical bye that follows an overseas game.

"The goal is to keep them on Central time as much as possible," said Williams, the team's executive director of player health and performance. "We know we'll shift them a little bit. We just won't shift them all the way there."

Now is the easy part. Unlike Sunday's designated home team, New Orleans, which flew to London from Charlotte the day after Sunday's loss to Carolina, the Vikings have been sleeping in their own beds and will keep practicing as normal at TCO Performance Center through Thursday afternoon before boarding their flight at 6:30 that evening.