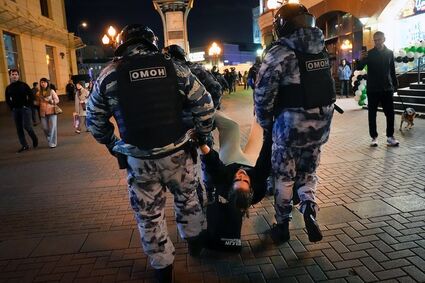 Riot police detained a demonstrator during a protest against mobilization last week in Moscow. Five days after President Vladimir Putin announced a partial mobilization of hundreds of thousands of reservists to fight in Ukraine, the move has triggered outraged protests, a fearful exodus and acts of violence across the country.

TALLINN, Estonia - Long lines of cars on roads snaking to Russia's border crossings with Georgia, Kazakhstan and Mongolia, and similar queues at airports.

Angry demonstrations - not just in Moscow and St. Petersburg - but in the remote far north province of Yakutia and in the southern region of Dagestan, with women chasing a police officer and shouting, "No to war!"

A gunman who opened fire in an enlistment office in a Siberian city and gravely wounded the military commandant, saying, "We will all go home now."