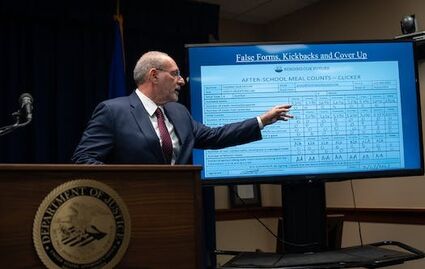 U.S. Attorney Andrew Luger announced charges on Sept. 20, 2022, against four dozen people involved in an alleged $250 million conspiracy to defraud the government out of money meant to feed needy children.

Federal authorities stopped another person linked to the Feeding Our Future fraud case from leaving the country on Monday, arresting the 49th person to be charged in the sprawling $250 million child food aid conspiracy.

Agents arrested Mohamed Muse Noor hours before his flight to Istanbul, Turkey, was scheduled to leave the Twin Cities on Monday morning. A federal criminal complaint charging Noor with participating in the fraud conspiracy said that law enforcement learned about the itinerary Sunday evening.

According to the charges, Noor is the cousin of Abdikerm Abdelahi Eidleh - a Feeding Our Future employee who has also been charged in the conspiracy and is accused of pocketing millions of dollars in bribes and kickbacks from other co-conspirators. Monday's new criminal complaint described Eidleh as a fugitive whom agents believe to now be in Mogadishu, Somalia.