Kirk Cousins hit K.J. Osborn with 45 seconds left to give the Vikings their only lead of the game 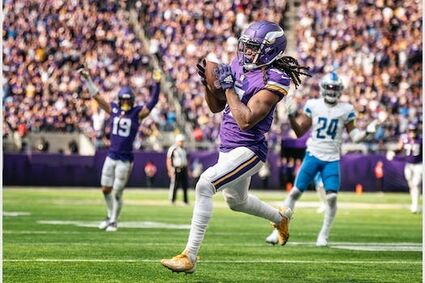 The Vikings will head to London with a 2-1 record and two division wins at home. They needed virtually every second of Sunday's game against the Lions to get there.

Down 14-0 in the first half, the Vikings rallied to tie the game, then fell behind by 10 again. But after they stopped Jamaal Williams on the Lions' sixth fourth-down attempt of the day - and Lions coach Dan Campbell decided on a field goal attempt instead of a seventh attempt - Kirk Cousins hit K.J. Osborn for a pair of 28-yard completions, finding him wide open in the end zone for a touchdown with 45 seconds left that gave the Vikings a 28-24 win.

It is the first time since 2017 the Vikings will end September with a winning record, and the rally brought them back from another game that looked like it could spiral out of their hands.