Vikings lose to Eagles 24-7 in another Monday night dud 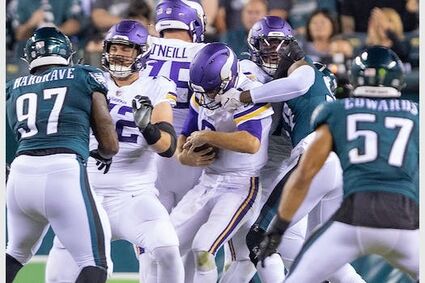 Minnesota Vikings Kirk Cousins quarterback was brought down by his face mask in the second quarter.

PHILADELPHIA - Vikings coach Kevin O'Connell cast Monday's game against the Eagles as something of a heat check after the team's season-opening win over the Packers. The Vikings, O'Connell said, were going to "find out a lot about where we're at, when we can travel away from our great home environment and go play in a really tough environment."

Previous Vikings coaches have seen their teams humbled at Lincoln Financial Field before. On Monday night, O'Connell became the latest Vikings coach to leave there with a humbling defeat.

Monday night's 24-7 drubbing in Philadelphia stripped away the shiny veneer from Week 1's win and recast the Vikings as a team still in search of consistent answers to many of the questions that lingered about them before the season.