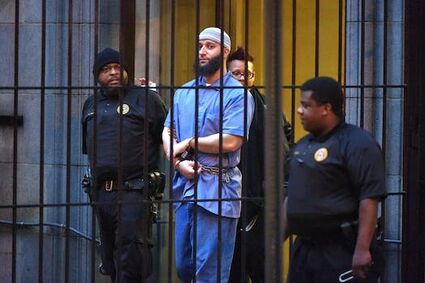 Officials escort "Serial" podcast subject Adnan Syed from the courthouse on Feb. 3, 2016, following the completion of the first day of hearings for a retrial in Baltimore.

BALTIMORE - A Baltimore judge on Monday ordered the release of Adnan Syed after overturning Syed's conviction for the 1999 murder of high school student Hae Min Lee - a case that was chronicled in the hit podcast "Serial," a true-crime series that transfixed listeners and revolutionized the genre.

At the behest of prosecutors who had uncovered new evidence, Circuit Court Judge Melissa Phinn ordered that Syed's conviction be vacated as she approved the release of the now-41-year-old who has spent more than two decades behind bars. There were gasps and applause in the crowded courtroom as the judge announced her decision.

Phinn ruled that the state violated its legal obligation to share evidence that could have bolstered Syed's defense. She ordered Syed to be placed on home detention with GPS location monitoring. The judge also said the state must decide whether to seek a new trial date or dismiss the case within 30 days.