Migrant buses dropped off by Texas near VP Harris' residence 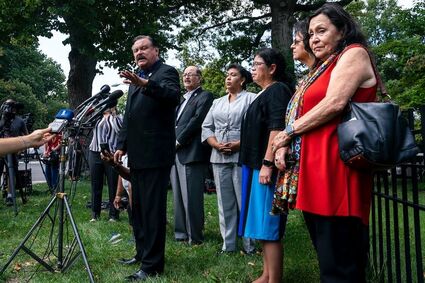 Domingo Garcia, the national president of the League of United Latin American Citizens, speaks to the media about migrants who were transported by bus from the U.S.-Mexico border and dropped off near Vice President Kamala Harris' home in residential Washington, Thursday, Sept. 15, 2022.

WASHINGTON - Two buses of migrants from the U.S.-Mexico border were dropped off near Vice President Kamala Harris' home in residential Washington on Thursday morning in the bitter political battle over the Biden administration's immigration policies.

Texas Gov. Greg Abbott has been busing migrants out of Texas to cities with Democratic mayors as part of a political strategy this year because he says there are too many arrivals over the border to his state. Arizona Gov. Doug Ducey also has adopted this policy, and Florida Gov. Ron DeSantis also got in on the act recently. It was first dreamed up by former President Donald Trump.

Abbott tweeted that he'd sent the buses that arrived Thursday: "We're sending migrants to her backyard to call on the Biden Administration to do its job & secure the border."