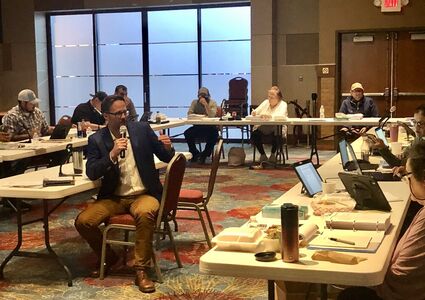 Olson fields a question from a program director

At the regular monthly meeting of the Red Lake Tribal Council held on Tuesday September 13, 2022, the Tribal Council was visited by a Beltrami County delegation. They included County Commissioner Reed Olson who was seeking tribal endorsement for State Representative 2A which include all of Red Lake and Bemidji.

Olson, after fielding several questions from the Council and Hereditary Chiefs was endorsed unanimously by the Council. Ponemah Representative Glenda Martin made a motion to endorse Red Lake tribal member Tim Sumner who is seeking his 4th term as Beltrami County Commissioner representing the northern part of the county including Red Lake Nation. He was also endorsed unanimously.

All Red Lake members are encouraged to vote in this upcoming general election and elect Olson and Sumner, a Red Lake member. Other folks on the ballot include Governor/Lt. Governor, Attorney General, Secretary of State, and Auditor. State Senator, State Representative and School Board are also on the ballot. 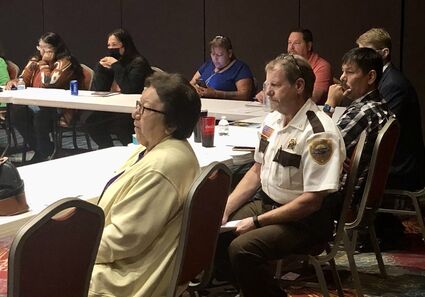 Senate District 2 includes a senate seat (Alan Roy) and two state representatives, Olson and Bailey Johnson. Flanagan, Bailey-Johnson, Roy and Sumner encourage all Indigenous People to register to vote, then vote for good representation at all levels of Government.

Please VOTE Tuesday November 8, 2022, at Red Lake Community Centers at Little Rock, Ponemah, Redby and Red Lake. This is a very important election and Red Lake could make the difference in these key races described above.