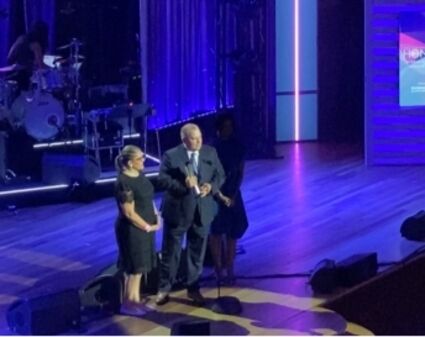 DURANT, Okla., (September 13, 2022) – For the second time, Choctaw Casino & Resort – Durant won the Academy of Country Music (ACM) Industry Award "Casino of the Year – Theater", an accolade the luxury gaming and entertainment destination proudly adds to their growing list of recognition. Choctaw Casino & Resort – Durant was previously nominated for five ACM Awards for "Casino of the Year – Small Capacity" and won its first award in 2019.

Since opening in 2015, The Grand Theater at Choctaw Casino & Resort – Durant has hosted more than 250 shows ranging from comedy shows to A-list tours like Aerosmith, Kid Rock, Chris Stapleton, and Carrie Underwood. Not only does the theater serve as a multipurpose epicenter of entertainment, but also symbolizes the continued expansion of the resort and elevated experience afforded to guests.

"We're deeply honored to have this recognition and proud to see Oklahoma represented in this category. It wouldn't be possible without the dedication and passion from our team," said Jeff Penz, Senior Director of Gaming Operations at Choctaw Casino & Resort – Durant. "Our role is to provide stellar entertainment and help our guests create long-lasting memories."

Guests are encouraged to join in on the celebration as The 15th Annual Academy of Country Music Honors will air Tuesday, Sept. 13 (8:00-10:00 PM ET/PT) on FOX, marking its return to television and the first time the special will air on the network.

About the Academy of Country Music:

Founded in Southern California in 1964 as a regional trade organization, the ACADEMY OF COUNTRYMUSIC (ACM)has grown in the almost-60 years since into a leading association for the Country Music industry. Today, the Academy boasts more than 5,000 professional members nationwide and serves as a powerhouse advocate for Country fans, artists, and all facets of the business, as well as a supporter of philanthropic work through charitable arm ACM LIFTING LIVES®, which works to improve lives through the power of music. 2022 will be a landmark year for the Academy, with a relocation from Los Angeles, CA to Nashville, TN and its iconic Academy of Country Music Awards streaming on Amazon Prime Video live from Las Vegas’ Allegiant Stadium, in a historic partnership, the first time a major awards show has been streamed exclusively. For more information, log onto http://www.ACMcountry.com or http://www.ACMLiftingLives.org