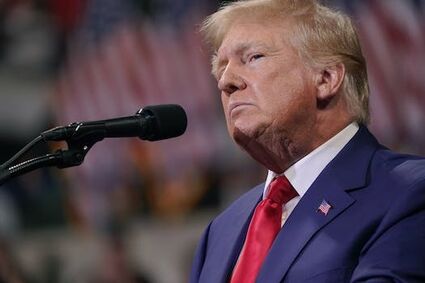 Former President Donald Trump spoke at a rally in Wilkes-Barre, Pa., this month.

WASHINGTON - The Justice Department said Monday that it was willing to accept one of Donald Trump's picks for an independent arbiter to review documents seized during an FBI search of the former president's Florida home last month.

The accommodation could help accelerate the selection process and shorten any delays caused by the appointment of the so-called special master. The judge in the case, granting a request from the Trump team, said last week that she would appoint a neutral arbiter to go through the records and weed out any that may be covered by executive privilege or attorney-client privilege.

Department lawyers said in a filing Monday night that, in addition to the two retired judges whom they earlier recommended, they would also be satisfied with one of the Trump team selections - Raymond Dearie, the former chief judge of the federal court in the Eastern District of New York. He is currently on senior active status, and the department said he had indicated he was available and "could perform the work expeditiously" if appointed.