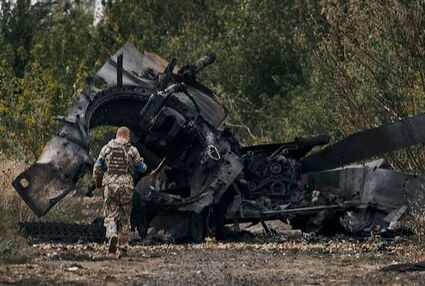 A Ukrainian soldier passes by a Russian tank damaged in a battle in a just freed territory on the road to Balakleya in the Kharkiv region, Ukraine, Sunday, Sept. 11, 2022.

KHARKIV, Ukraine - Ukrainian troops expanded their territorial gains Monday, pushing all the way to the country's northeastern border in places, and claimed to have captured a record number of Russian soldiers as part of the lightning advance that forced Moscow to make a hasty retreat.

A spokesman for Ukrainian military intelligence said Russian troops were surrendering en masse as "they understand the hopelessness of their situation." A Ukrainian presidential adviser said there were so many POWs that the country was running out of space to accommodate them.

Blue-and-yellow Ukrainian flags fluttered over newly liberated towns across a wide swath of reclaimed land. The Ukrainian military said it had freed more than 20 settlements in 24 hours. In recent days, Kyiv's forces have captured territory at least twice the size of greater London, according to the British Defense Ministry.