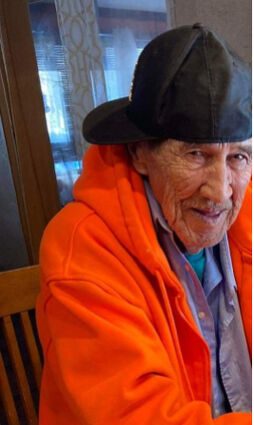 Harry passed away on September 8, 2022, surrounded by his loved ones in the comfort of his home in Red Lake.

An all-night wake will be held on Saturday, September 10, at the Red Lake Center starting at 7 p.m. with a feast/celebration of life. On Sunday we will feast at noon. Following the feast we will travel to the outlet. At approximately 2:00 p.m. we will launch the boats to go to the Narrows where his family will spread his ashes. All are welcome to bring your boat, if you would like to cross the lake to the Narrows with us. For those that can’t boat you are welcome to drive to the Narrows.

Harry “Peewee” Solomon Hanson, Jr. was born in Red Lake, MN on February 28, 1939, to Harry Hanson, Sr., and Lorena Helen Hanson (Desjarlait). Surrounded by his loved ones, Harry passed away on September 8, 2022, in the comfort of his home in Red Lake, MN.

Harry grew up on the Red Lake Indian Reservation, attending St. Mary’s Mission School and Red Lake High School. Harry was an exceptional athlete, known for hitting home run after home run on the ball fields around Red Lake. Throughout his lifetime he was an avid fisherman and hunter, taking deer, moose, birds, snapping turtles, squirrels, and beaver on the trap line. His love was our lake, and his adventures were many – he set and pulled nets, ice fished, and cruised the waters in his variety of boats over the years. Harry was also generous and thoughtful, known for sharing the venison, moose, and fish he caught with elders in our community. The same generosity he had then, was the same generosity he had throughout his life.

Harry had an entrepreneurial spirit, owning his logging company for many years and opening and operating the Game Hall in Red Lake. Endowed with a sharp intellect, he was creative in exploring economic development avenues both on a personal level and for Red Lake.

A strong voice and figure, Harry was elected to the Red Lake Tribal Council in 1972, serving as the Red Lake district representative, the reservation’s largest district, until his resignation in 1975. This time period in Red Lake was marked by political discord and in May of 1979, Harry led an uprising on the reservation that was sparked by the then Tribal Chairman’s ouster of the elected Tribal Treasurer. The uprising and takeover resulted in political and federal staff changes, in addition to the destruction of several buildings and homes on the reservation. It also led to Harry ‘s conviction in July 1979 to 26 years in federal prison.

Spending significant time incarcerated over his lifetime, Harry made many friends out on the yard. He became fluent in Spanish, adding to his Ojibwe and English language skills. He became a champion handball player and was known throughout the system for his expertise. During those years, Harry worked hard to maintain his connection with family, in particular writing many treasured letters.

The past eight years of Harry’s life reflected the best of him. His wit, sharp intellect, and love for family and his many friends were most evident. The twinkle in his eye that was familiar to so many was often present. Harry had a particular ease across communities, maintaining many friendships outside of Indian Country as well.

Harry was also an imposing physical presence, maintaining extraordinary physical health throughout his lifetime - perhaps aided by an abundance of time to do so at certain points. He walked miles almost every day - rain or shine; hot or cold, showing up for unexpected visits along the way.

Harry finished out his days fishing on his beloved lake, tapping the maple trees in the spring with his grandchildren, playing with the great grandchildren, and celebrating birthdays, milestones, and the many accomplishments of his children and grandchildren.

This obituary would not be complete without noting the following: Harry knew how to raise hell.

An all-night wake will be held at 7 p.m. on Saturday, September 10, at the Red Lake Center and will begin with a Feast. On Sunday, we will have a Feast at noon, and Harry’s family and friends will then gather at the Outlet on the south shore of Lower Red Lake and will take him across the lake by boat one last time. Harry’s ashes will be spread by his family at The Narrows on Red Lake. A Feast will follow at the Red Lake Center.

“Things that don’t destroy me only make me stronger.” – favorite quote of Harry Solomon Hanson, Jr.