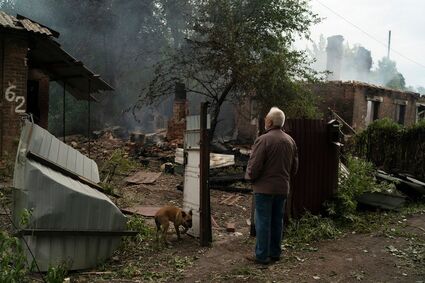 Oleksander Zaitsev, 67, stands in front of the house where his friend was found dead after a Russian attack in Pokrovsk region, Ukraine, Sunday, Sept. 11, 2022.

As the war in Ukraine marked 200 days on Sunday, the country has reclaimed broad swaths of the south and east in a long-anticipated counteroffensive that has dealt a heavy blow to Russia.

The counterattack began in the final days of August and at first focused on the southern region of Kherson, which was swept by Russian forces in the opening days of the invasion. But just as Moscow redirected attention and troops there, Ukraine launched another, highly effective offensive in the northeast, near Kharkiv.

Facing the prospect of a large group of its forces becoming surrounded, Moscow pulled back its troops from Kharkiv in a dramatic shift in the state of play that posed the biggest challenge to the Kremlin since it launched the invasion Feb. 24.