'We've been at the table' 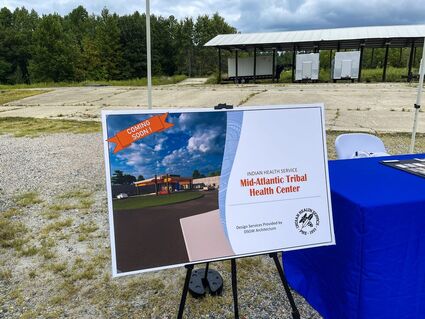 A poster showing a rendering of the future Mid-Atlantic Tribal Health Center is seen in Charles City, Virginia, on September 7, 2022. Photo by Indianz.Com (CC BY-NC-SA 4.0)

CHARLES CITY, Virginia - Tribal nations here are ushering in a new era in health care after securing recognition from the federal government.

Since re-establishing their government-to-government relationships with the United States, seven tribes have been working closely with the Indian Health Service. The efforts include two health centers and three mobile units that will bring long-overdue care to people across a broad region in the state of Virginia.

"You know, often times tribes get called in to consult - after decisions have been made," Chief Stephen R. Adkins of the Chickahominy Tribe told Indianz.Com.