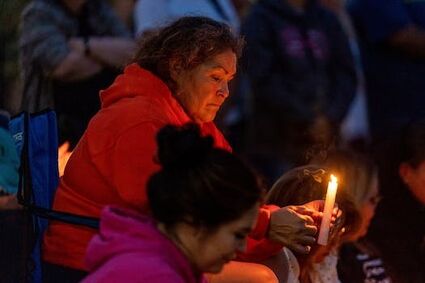 A mourner holds a candle at a vigil in honor of the victims of a mass stabbing incident at James Smith Cree Nation and Weldon, Saskatchewan, in front of City Hall in Prince Albert, Saskatchewan, on Wednesday, Sept. 7, 2022.

ROSTHERN, Saskatchewan - The last suspect in a horrific stabbing rampage that killed 10 and wounded 18 in western Canada is dead following his capture, but how he died after being taken into custody has prompted fresh investigations.

One official said Myles Sanderson, 32, died from self-inflicted injuries Wednesday after police forced the stolen car he was driving off a highway in Saskatchewan. Other officials declined to discuss how he died .

"I can't speak to the specific manner of death. That's going to be part of the autopsy that will be conducted," Assistant Commissioner Rhonda Blackmore, commander of the Royal Canadian Mounted Police in Saskatchewan, said at a news conference Wednesday night.