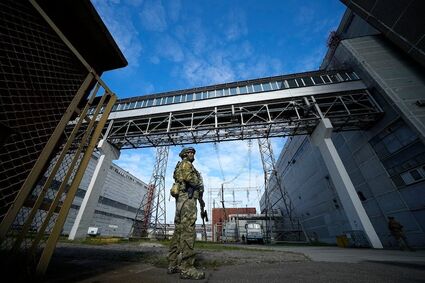 FILE - A Russian serviceman guards an area of the Zaporizhzhia Nuclear Power Station in territory under Russian military control, southeastern Ukraine, May 1, 2022. Ukraine's Zaporizhzhia nuclear power plant , built during the Soviet era and one of the 10 biggest in the world, has been engulfed by fighting between Russian and Ukrainian troops in recent weeks, fueling concerns of a nuclear catastrophe.

KYIV, Ukraine - Shelling resumed near Ukraine's Zaporizhzhia nuclear power plant, with the warring sides trading blame again on Wednesday, a day after the U.N. atomic watchdog agency pressed for a safe zone there to prevent a catastrophe.

Russian forces fired rockets and heavy artillery on the city of Nikopol, on the opposite bank of the Dnieper River from Europe's largest nuclear plant, regional Gov. Valentyn Reznichenko said.

"There are fires, blackouts and other things at the (plant) that force us to prepare the local population for the consequences of the nuclear danger," Reznichenko said. Officials in recent days have distributed iodine pills to residents to help protect them in the event of a radiation leak.