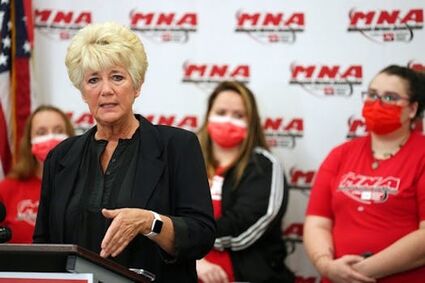 Mary Turner, president of the Minnesota Nurses Association, announced Sept. 1 that hospital nurses in the Twin Cities and Duluth would hold a three-day strike beginning Sept. 12 if a contract isn't reached.

Preparations for a three-day hospital nursing strike in the Twin Cities and Duluth next week have flooded the Minnesota Board of Nursing with temporary licensing applications.

The board has received 7,604 permit applications since June 6, largely from replacement nurses around the country receiving high-dollar offers to work in the affected hospitals next week. That is seven times more applications than during the same time last year.

"Our typical processing time ... is five days, however, we are currently at 10 to 14 days for permits," said Kimberly Miller, executive director for the state nursing board.