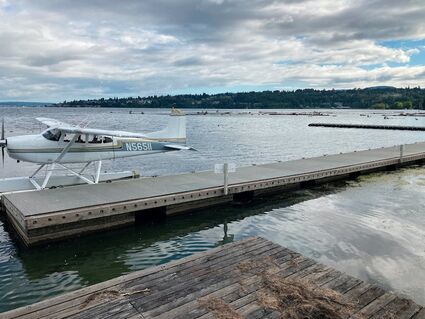 The home base for Northwest Seaplanes and Friday Harbor Seaplanes at the Renton Municipal Airport was quiet Monday, Sept. 5, 2022, as they awaited reports from the U.S. Coast Guard, which is searching the waters of Puget Sound northwest of Seattle after one of their floatplanes crashed on Sunday, Sept. 4, afternoon. One body was recovered and nine remained missing on Monday. (AP Photo/Martha Bellisle)

A husband and wife from the Twin Cities were among the 10 people who died in the crash of a float plane into Washington state's Puget Sound over the weekend, Coast Guard officials said Tuesday.

The single-engine DHC-3 Turbine Otter had left Friday Harbor, a popular tourist spot, for the Seattle suburb of Renton, when it went down Sunday with no distress call.

One body was recovered by a civilian, but the others remain unaccounted for and may never be recovered, according to the Coast Guard, which has not disclosed the name of the victim found in the water.