Minnesota students return to class for a new school year 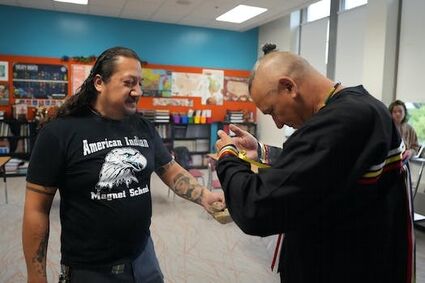 Thomas Draskovic, the kindergarten through fourth grade Lakota language and culture specialist at the American Indian Magnet School, stops in on staff as he smudges the school on the first day of class.

Principal Salma Hussein began her first day at Gideon Pond Elementary School in Burnsville on Tuesday by greeting pupils and their parents - in English and Somali.

About 40% of the south metro school's student body is Somali, Hussein said, and she recalls how much it would have meant to her to see someone who shares her background leading one of her schools.

"I want, for these little ones, to have that much sooner," said Hussein, who spent the last few weeks visiting students at home and attending ice cream socials at Gideon Pond to familiarize herself with her new community.