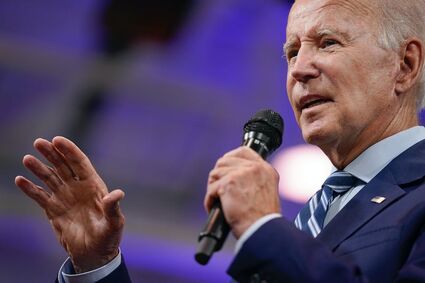 President Joe Biden speaks at the Arnaud C. Marts Center on the campus of Wilkes University, Tuesday, Aug. 30, 2022, in Wilkes-Barre, Pa. Biden is making his third trip to Pennsylvania in less than a week and returning just two days after his predecessor, Donald Trump, staged his own rally there, illustrating the battleground state's importance to both parties as Labor Day kicks off a nine-week sprint to crucial midterm elections.

WASHINGTON - President Joe Biden excoriated "MAGA Republicans" and the extreme right on Monday, pitching personal Labor Day appeals to swing-state union members who he hopes will turn out in force for his party in November.

"The middle class built America," Biden told a workers' gathering at park grounds in Milwaukee. "Everybody knows that. But unions built the middle class."

Later Monday, he flew to West Mifflin, outside Pittsburgh - returning to Pennsylvania for the third time in less than a week and just two days after his predecessor, Donald Trump, staged his own rally in the state.