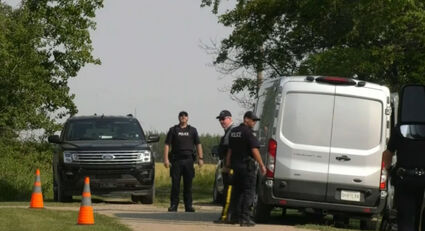 Police investigating mass stabbings in Saskatchewan that left 10 dead and 18 others injured. (Photo/Facebook)

One of two brothers allegedly connected with the mass stabbing deaths of 10 people and injuries of 18 others, has been found dead.

Damien Sanderson, 31, was found earlier Monday dead. Details of his death were not announced during a law enforcement press conference.

His brother, Myles, is still at large and should be considered armed and dangerous, according to Saskatchewan RCMP Commanding Officer Assistant Commissioner Rhonda Blackmore, who spoke at a press conference late Monday afternoon.