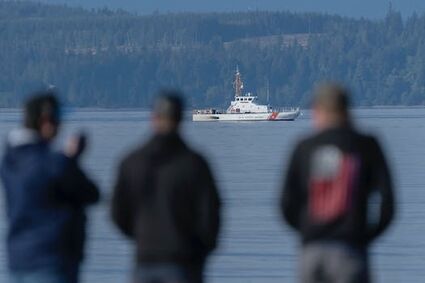 A U.S. Coast Guard vessel searches the area, Monday, Sept. 5, 2022, near Freeland, Wash., on Whidbey Island north of Seattle where a chartered floatplane crashed the day before.

HIDBEY ISLAND, Wash. - The U.S. Coast Guard suspended the search Monday afternoon for nine people, including a child, who were missing after a floatplane crashed in the waters of Puget Sound northwest of Seattle.

The body of a 10th person, an unidentified female, was recovered by a good Samaritan on Sunday after the crash was reported at 3:11 p.m., Scott Giard, director of the U.S. Coast Guard's search and rescue for the Pacific Northwest, said at a new conference.

Just after noon on Monday, the Coast Guard said it was suspending the search for survivors after "saturating an area" of more than 2,100 square nautical miles (nearly 2,800 square miles or 7,250 square kilometers.