Walz calls on Jensen, Birk to release tax returns. They haven't done so

Walz released his months ago, says it's tradition for gubernatorial candidates 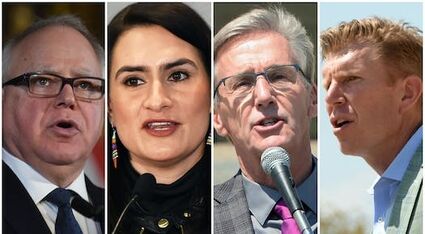 The latest flash point in the Minnesota governor's race is whether the GOP candidates should release their personal income tax returns, a public transparency tradition that stretches back at least a decade.

DFL Gov. Tim Walz is pushing his Republican opponent, former state Sen. Scott Jensen, and running mate Matt Birk, a former center for the Minnesota Vikings, to release their returns. Jensen and Birk have given no signal they plan to do so and have publicly panned the idea.

"Does anybody care?" Birk asked in late August at an event in Minneapolis. "You tell me what you're looking for and I can give it to you. This is another distraction. Nobody has come up to me on the street and said, 'Hey, I'm really interested in seeing your tax return.' "