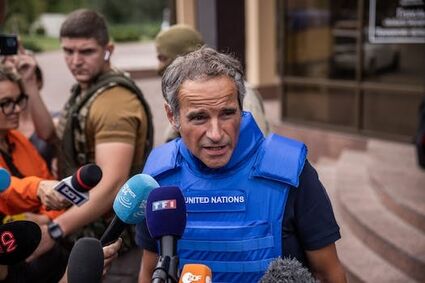 Rafael Grossi, the International Atomic Energy Agency's secretary general, spoke to reporters before he and his delegation left Zaporizhzhia, Ukraine, to inspect the nearby nuclear power plant occupied by Russian soldiers, on Thursday, Sept. 1, 2022.

ZAPORIZHZHIA, Ukraine - A U.N. inspection team entered Ukraine's Zaporizhzhia nuclear power plant Thursday on a mission to safeguard it against catastrophe, reaching the site amid fighting between Russian and Ukrainian forces that prompted the shutdown of one reactor and underscored the urgency of the task.

The 14-member delegation from the International Atomic Energy Agency arrived in a convoy of SUVs and vans after months of negotiations to enable the experts to pass through the front lines and get inside Europe's biggest nuclear plant.

"The IAEA is now there at the plant and it's not moving. It's going to stay there. We're going to have a continued presence there at the plant with some of my experts," IAEA director Rafael Grossi, the mission leader, declared after the group got its first look at conditions inside.