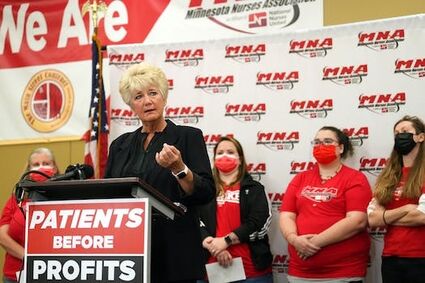 Mary Turner, president of the Minnesota Nurses Association, spoke Thursday in St. Paul about the next steps in the association's contract negotiations and possible strike that could involve up 15,000 nurses.

As many as 15,000 Twin Cities and Duluth hospital nurses could strike for three days, starting Sept. 12, if an agreement isn't reached on overdue three-year contracts.

Thursday's 10-day advance notice of a strike follows weeks of unsuccessful negotiations - with the two sides far apart on wage increases, staffing levels, and compensation and support after two and a half years of pandemic.

A "crisis of retention" motivated the strike decision, said Mary Turner, president of the Minnesota Nurses Association (MNA) and an intensive care nurse at North Memorial Health in Robbinsdale. Unless pay and benefits are substantially improved, the continued loss of nurses will leave hospitals dangerously understaffed.