Documents at Mar-a-Lago were moved and hidden as U.S. sought them, filing suggests 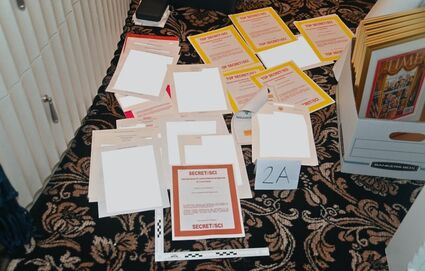 An image the Department of Justice included in an Aug. 30 court filing shows documents marked SECRET//SCI that were recovered from Donald Trump's Mar-a-Lago club and home in Florida. Federal agents arrayed classified materials on a floor at Trump's Florida residence for a photograph as a standard part of their evidence-gathering procedures.

WASHINGTON - The Justice Department sought a search warrant for former President Donald Trump's residence in Florida after obtaining evidence that highly classified documents were likely concealed and that Trump's representatives had falsely claimed all sensitive material had been returned, according to a court filing by the department Tuesday.

The filing came in response to Trump's request for an independent review of materials seized from his home, Mar-a-Lago. But it went far beyond that, painting the clearest picture yet of the department's efforts to retrieve the documents before taking the extraordinary step of searching a former president's private property on Aug. 8.

Among the new disclosures in the 36-page filing were that the search yielded three classified documents in desks inside Trump's office, with more than 100 documents in 13 boxes or containers with classification markings in the residence, including some at the most restrictive levels.