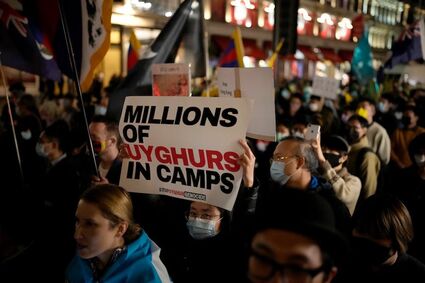 FILE - Demonstrators supporting Tibetans, Uyghurs and Hong Kongers take part in a protest against the Chinese Communist Party (CCP) to coincide with the 72nd National Day of the People's Republic of China, as they march along Regent Street towards the Chinese Embassy, in London, on Oct. 1, 2021.

GENEVA - China's discriminatory detention of Uyghurs and other mostly Muslim ethnic groups in the western region of Xinjiang may constitute crimes against humanity, the U.N. human rights office said in a long-awaited report Wednesday, which cited "serious" rights violations and patterns of torture in recent years.

The report seeks "urgent attention" from the U.N. and the world community to rights violations in Beijing's campaign to root out terrorism.

U.N. human rights chief Michelle Bachelet, facing pressure on both sides, brushed aside multiple Chinese calls for her office to withhold the report, which follows her own, much-criticized trip to Xinjiang in May. Beijing contends the report is part of a Western campaign to smear China's reputation.