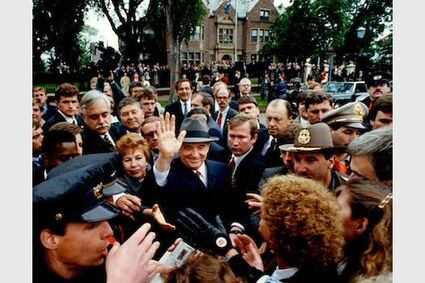 During their 1990 Minnesota visit, Mikhail Gorbachev and his wife, Raisa, greeted spectators outside the governor's Mansion.

MOSCOW - Mikhail Gorbachev, who set out to revitalize the Soviet Union but ended up unleashing forces that led to the collapse of communism, the breakup of the state and the end of the Cold War, died Tuesday. The last Soviet leader was 91.

The Central Clinical Hospital said in a statement that Gorbachev died after a long illness. No other details were given.

Kremlin spokesman Dmitry Peskov said in a statement carried by Russian news agencies that Russian President Vladimir Putin offered deep condolences over Gorbachev's death and would send an official telegram to Gorbachev's family in the morning.

Let's also recall importantly that until his death, he stood up to end all nuclear weapons. We almost got there with him.... but according to his memoirs, the nuclear weapon industry slid back in. https://www.youtube.com/watch?v=L9ieK9Fo82M