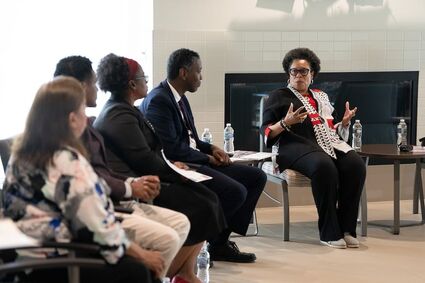 U.S. Department of Housing & Urban Development Secretary Marcia Fudge, right, speaks at a separate event at the Elliot Twins public housing towers, her second public stop during a visit to Minneapolis on Monday. Seated next to her is Abdi Warsame, executive director and CEO of the Minneapolis Public Housing Authority.

The federal government will provide an additional $15 million to help senior citizens across the country upgrade their homes so they can continue to live in them safely, officials announced during a Monday visit to Minneapolis.

U.S. Department of Housing and Urban Development Secretary Marcia L. Fudge said the new funding represents a sliver of the roughly $100 billion needed to address housing problems across the nation. But, she said, "It's an awful lot for the people who need it."

Fudge announced the new funding at the Willard-Hay home of Bettie and John Smith, a couple who benefited from the roughly $30 million federal authorities previously had budgeted for the Older Adult Home Modification grant program. Families can use the money to cover a wide variety of expenses.