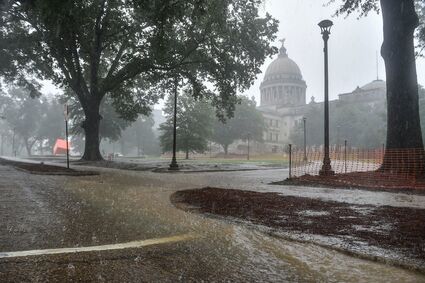 Hannah Mattix, the Clarion-Ledger via AP

Flooding from heavy rains that have plagued the region in recent days is seen at the state Capitol in downtown Jackson, Miss., Wednesday, Aug. 24, 2022. Torrential rains and flash flooding prompted rescue operations, closures and evacuations in the central part of the state.

JACKSON, Miss - The forecasted flooding in Mississippi could not have come at a worse time for Veronique Daniels, who became homeless three months ago and was sleeping on her mother's back porch in Jackson when she got wind of the impending disaster.

The Red Cross has opened a temporary shelter at the Jackson Police Department Training Academy. As of Sunday afternoon, Daniels was the first person to arrive. She found out about the shelter on Facebook and had her mother drop her off Sunday morning.

Daniels' mother lives in Canton Club Circle, the same Jackson subdivision that flooded two years ago. Residents on Sunday were taking precautions as the previous flooding loomed large in their memories.